The Philippines is reputed to be one of the countries in the world where government corruption is highest, where large state resources are diverted to private gain and corruption is so “normalized” as to corrupt public morality itself. Since 1950, government has had a series of anti-corruption bodies. Weakly institutionalized, lacking in will, and often corrupted themselves, the record of these bodies has been dismal. The creation of the Office of the Ombudsman (OMB) in 1987 was to be a major step in the anti-corruption campaign, yet again failed to live up to its promise. The justice system is extremely sluggish; cases have mostly involved low-level officials and employees; and public confidence in government’s resolve to root out corruption is practically non-existent. This was the daunting challenge that CONCHITA CARPIO MORALES faced when she was appointed Ombudsman in 2011.

Born to a family of lawyers, she dreamed of becoming a lawyer herself, and pursued the dream in impressive fashion: passing the bar in 1969, working in the Department of Justice, becoming a regional trial court judge, a justice in the Court of Appeals, and finally a Justice of the Supreme Court. Through her long career, she demonstrated the qualities of the quintessentially good public servant: professionalism, competence, integrity, and equanimity in the face of difficult challenges. She set a standard for herself when she said: “The most difficult case to decide is the most fulfilling achievement. However you decide it, you come to a certain point that you think will spell the difference.”

She brought these qualities to her work as Ombudsman. In her strict, scrupulous style, she professionalized and upgraded OMB’s capabilities; revolutionized its anti-corruption program to include the designation of deputy ombudsmen for environmental concerns and for investment-related problems; and improved its responsiveness to calls for public assistance. Setting a target of zero backlog in the investigation or adjudication of cases and disposition of all requests for assistance, the backlog has already decreased and she expects to hit the target by 2018. She raised the independence and quality of OMB’s fact-finding investigations, evidence build-up, prosecution strategies and case management to ensure that meritorious cases are not sabotaged, withdrawn, or dismissed. The results? From 2011 to 2015, the conviction rate of cases handled by OMB before the Sandiganbayan rose from 33.3 percent to 74.5 percent.

She prioritized the filing of cases against high-ranking officials, sending the strong signal that OMB is earnest in its anti-corruption campaign. Under her leadership, OMB has boldly imposed strict administrative sanctions on high officials, filing cases against a former president; a former vice-president; incumbent senators, congressmen, and governors. She is the first Ombudsman to use the waiver in the Statement of Assets, Liabilities and Net Worth (required of government officials and employees) as basis to secure bank records in impeaching one of the country’s highest officials.

Recognizing that corruption is not just a matter of persons but systems, she took the initiative in creating an integrity management-based program that mobilizes government agencies and the public and addresses the lack of strategy and direction in the overall anti-corruption campaign. She advocated the passage of legislation to strengthen the OMB’s investigative, disciplinary, asset recovery, and preventive powers. All these are part of her resolve to go beyond political tokenism by establishing the framework of an effective anti-corruption campaign.

Her work is unfinished, and the challenge is not hers alone; but already she has radically improved the efficacy and credibility of OMB, and has shown the way towards a more coherent, concerted action against corruption. Unfazed and quietly determined despite death threats, MORALES, now 75 years old, does not sensationalize her efforts and always works within the law even as she pushes its limits. She is, quite simply, an inspiring public servant.

In electing CONCHITA CARPIO MORALES to receive the 2016 Ramon Magsaysay Award, the board of trustees recognizes her moral courage and commitment to justice in taking head-on one of the most intractable problems in the Philippines; promoting by her example of incorruptibility, diligence, vision and leadership, the highest ethical standards in public service.

I would like to extend my profound thanks to the Foundation for this honor.

Please allow me to break tradition by reading a letter to my grandchildren who call me Grand C:

I am often asked why and how I continue to work. I will now tell you my secret: I draw inspiration and energy from you. I continue working because I want to secure a just and honest society for you and for every Filipino child.

When I retired from the Supreme Court five years ago, I was ready to play the role of a doting grandmother. Called upon to help ensure a better future for our children, over the opposition of those who thought that gender and age were not in my favor, I did not shrink from this responsibility. Because the stark reality is that there are millions of other grandchildren who are being robbed of a bright future by those consumed with greed and lust for power.

This award proves the skeptics wrong. Indeed, gender and age are irrelevant in this crusade, the primary qualification being unassailable integrity, earned through consistent application of the rule of law. I pray that you —and all young Filipinos —imbibe the same moral value and pass it on to the next generation.

Today, we also celebrate the life of President Ramon Magsaysay. In school you will learn that President Magsaysay steered the Philippines to its golden years, his tenure being one of the cleanest and most corruption-free in the history of our country. We should look back to this glorious past as guiding light in our search for leaders of the same persuasion. Children should never lose faith. Children should never lose hope.

Please pray that Grand C and her colleagues at the Office of the Ombudsman will win the fight against corruption. Without the continued support of other stakeholders and most importantly, the family, it will remain an uphill battle.

Thus, I am accepting this award on behalf of my colleagues at the Office for their perseverance in carrying out our constitutional mandate as protectors of the people. I am also accepting this recognition on behalf of all anti-corruption advocates including journalists, civil society workers and good governance volunteers who complement the work of the Ombudsman. They are the real heroes in the fight against corruption.

I hope that our shared crusade results in succeeding generations of Filipinos who will not allow corruption to tear at the protective mantle of the rule of law, the anchor of our democracy. But it is up to us to stay safely anchored, or drift into the dangerous currents of anarchy. It is up to us to earn the distinction of being a society that lives by the credo of President Magsaysay that “those who have less in life should have more in law.”

Ennio and Cece, as you go to bed tonight, know that your grandmother is optimistic that your tomorrow will be a better day. 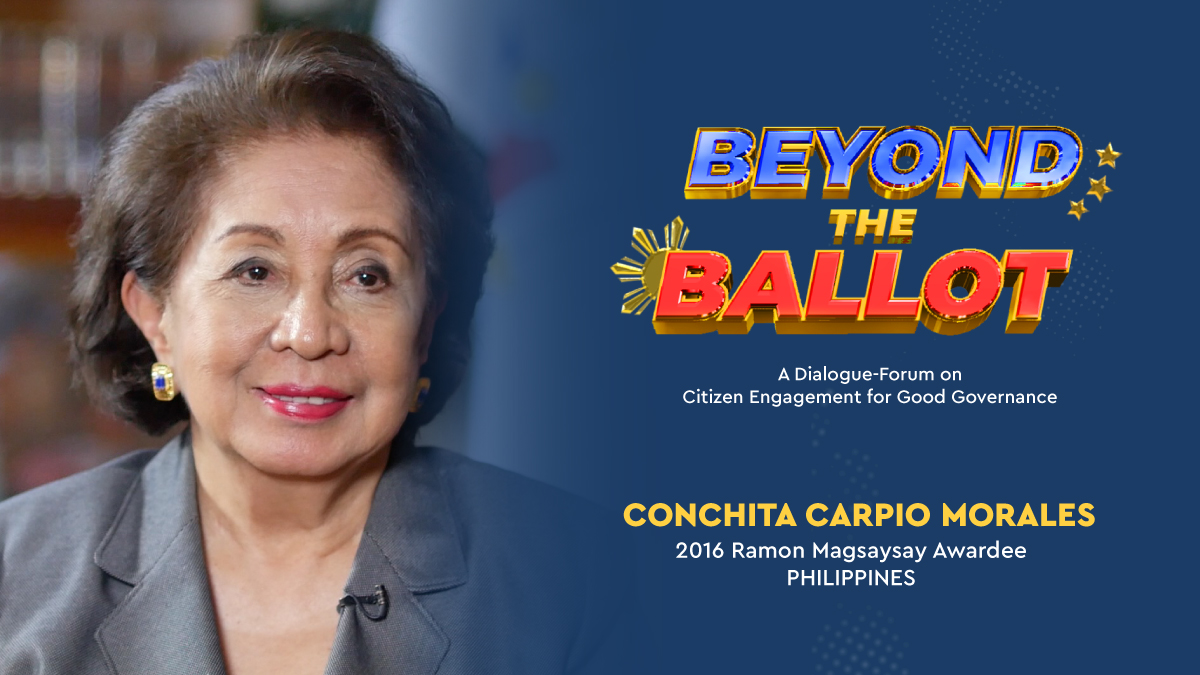 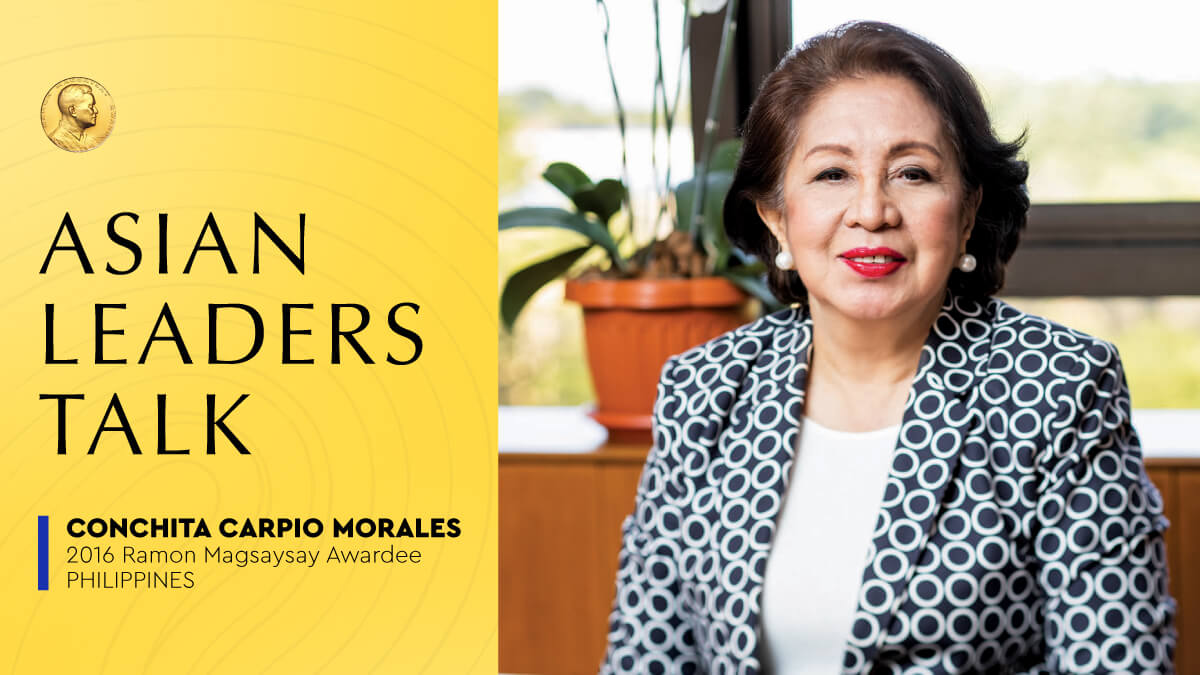 Through the Asian Leaders Talk, we asked former Ombudsman of the Philippines and 2016 Ramon Magsaysay Awardee CONCHITA CARPIO MORALES her quick take on transformative leadership and Greatness of Spirit.
DRAG
Follow us on: