2019
A stoic leader who has been championing justice for the marginalized in Southern Thailand, case after painful case
Learn more about the awardee:

Due to religious and ethnic conflict in southern Thailand, the resulting insurgency and militarization saw more than 6,000 people killed in the conflict since 2004. Some ninety percent of these were civilians, including the unsolved killings of civil society and human rights activists.

One of the more sensational of these killings was the “enforced disappearance” in 2004 of noted human rights lawyer Somchai Neelapaijit. 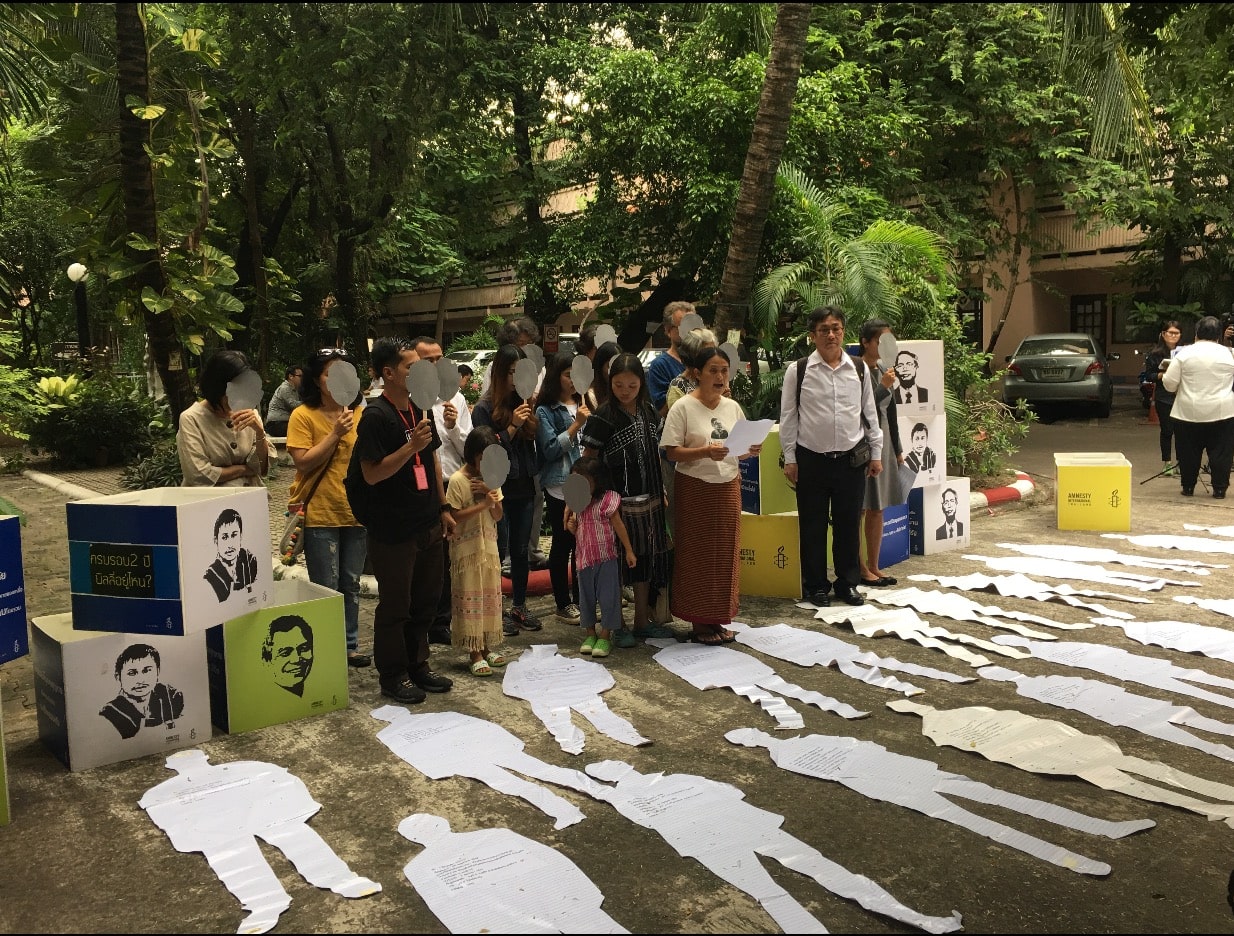 Until Somchai’s disappearance and death, his wife Angkhana was a housewife caring for their home, five children and a small business.  Suddenly as his grieving widow, she was thrust into the human rights cause, seeking to bring his killers to justice—learning the laws, filing  legal appeals, and navigating the Thai legal system.

She founded Justice for Peace Foundation (JPF), an organization that documents the human rights situation in southern Thailand, provides legal assistance to victims, and trains women on human rights and the peace process. 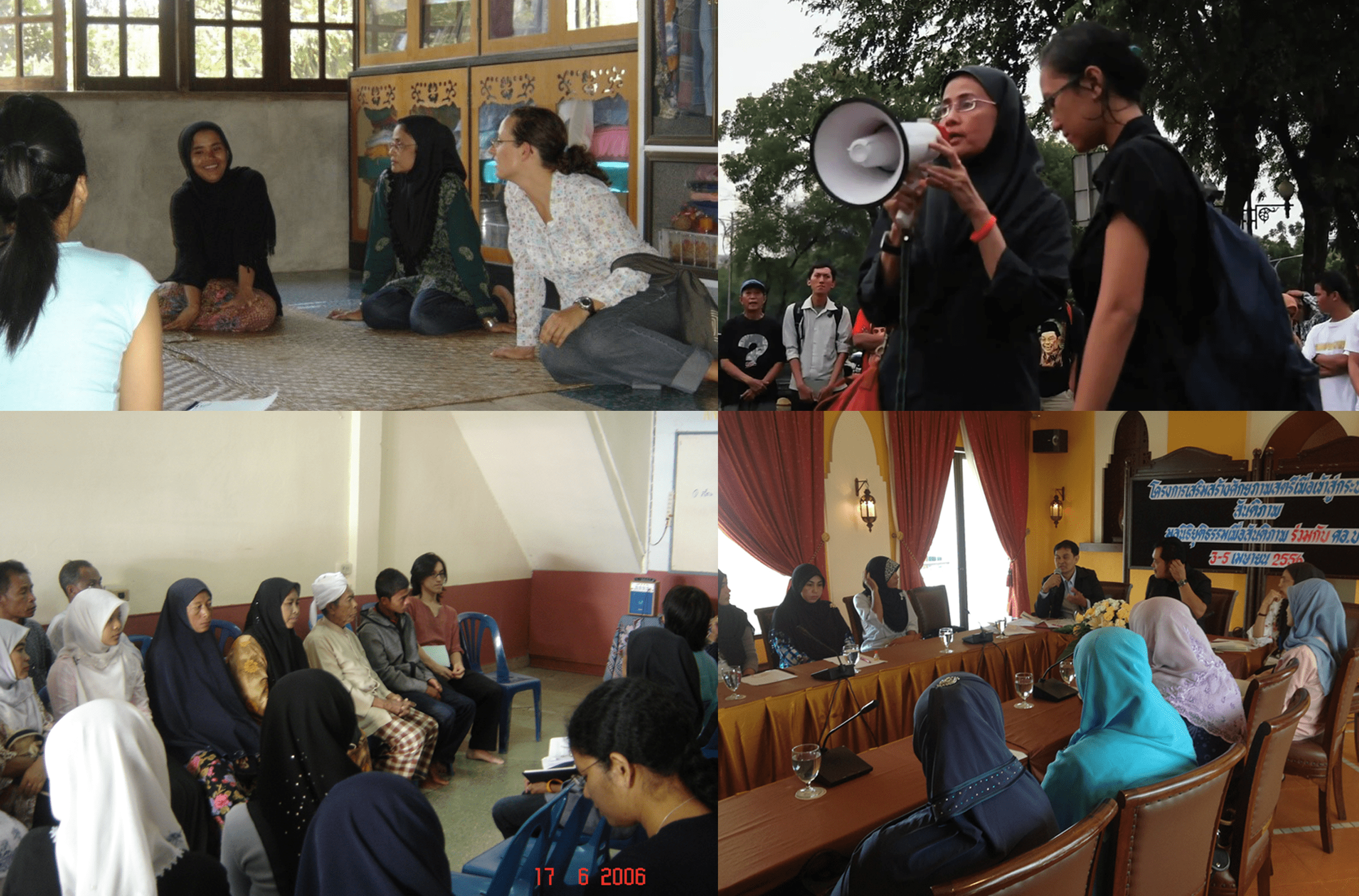 Appointed commissioner of the National Human Rights Commission of Thailand in 2015, Angkhana worked on the rights of   detainees to access their families and their lawyers, financial compensation for human rights  victims, and protecting the exercise of freedom of expression and assembly.  Lately she has taken on cases related to forced child marriages, trafficking of women, and the rights of asylum seekers and refugees. 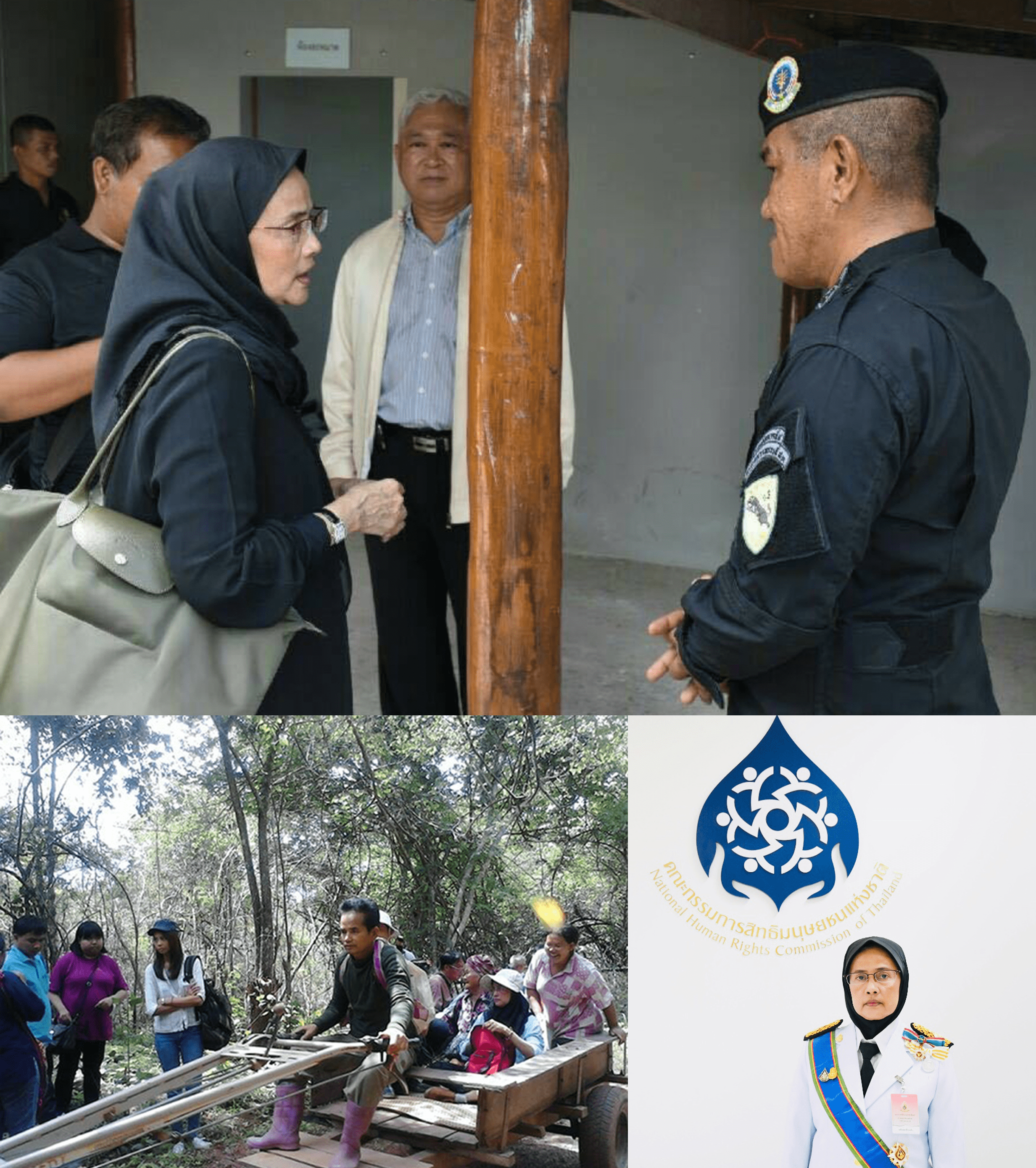 Angkhana asserts, “Most women experience conflict and violence in a different way than men.  They develop unique skills for resisting, addressing and preventing conflict.  The work on justice and peace cannot afford to neglect the constructive contributions of women.” 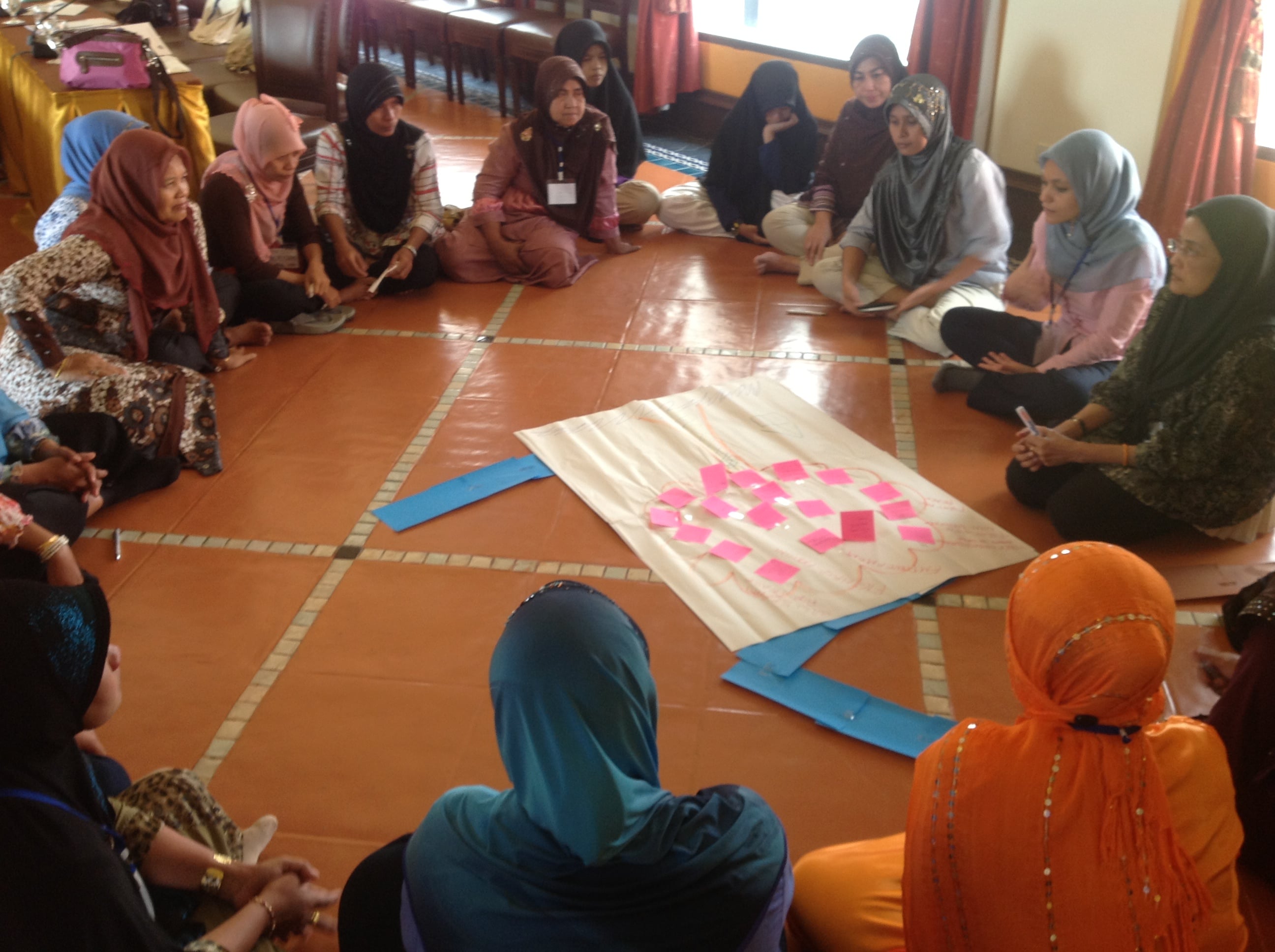 A predominantly Muslim region in a staunchly Buddhist country, southern Thailand has struggled with religious and ethnic conflict since a separatist insurgency rocked the region in 1948.  Insurgency and militarization have exacted a heavy toll: it is reported that of the more than 6,000 people killed in the conflict since 2004, some ninety percent of these were civilians. These deaths have included the unsolved killings of more than thirty civil society and human rights activists.  One of the more sensational of these killings was the “enforced disappearance” in 2004 of noted human rights lawyer Somchai Neelapaijit, who was abducted in Bangkok the day after he had publicly accused the military of torturing detainees in southern Thailand.

Somchai’s enforced disappearance and subsequent death was a tragic blow to the cause of human rights in the country, and a devastating personal nightmare for his family.  But it would also be the beginning of a remarkable journey for Somchai’s widow, ANGKHANA NEELAPAIJIT, herself a Muslim Thai of humble origins. When her husband “disappeared” ANGKHANA was a housewife looking after their five young children and a small business. Thrust into a dangerous and public controversy, she valiantly worked to bring the police officers involved to trial, but due to a flawed justice system they were acquitted.  Despite the death threats she received, ANGKHANA continued to seek justice for her husband and other human rights victims.  She applied herself to learning the laws, filing legal appeals, and navigating the Thai legal system.  She bonded with other victims, and worked with civil society groups in and outside Thailand.

In 2009, with the help of non-government organizations and her own family, ANGKHANA founded Justice for Peace Foundation (JPF), a network of human rights and peace advocates that has done important work in documenting the human rights situation in southern Thailand, thus raising public awareness and putting pressure on government to act on human rights cases; providing legal assistance to victims; and training women on human rights and the peace process.  In a vital initiative, JPF and other groups pushed for laws that will criminalize torture and enforced disappearances (current Thai law recognizes murder only if the body could be found). Their steadfast lobbying succeeded in getting the Thai government to sign and ratify the United Nations Convention Against Torture in 2007, and the Convention to Protect All Persons from Enforced Disappearance in 2012—already major victories even though the implementing rules have yet to be issued.

In 2015, ANGKHANA was named commissioner of the National Human Rights Commission of Thailand, the only commission member with grassroots human rights experience.  Despite the skepticism of government critics, ANGKHANA has taken her appointment seriously, firmly committed to taking the peaceful, legal approach to fighting human rights abuses and to doing what she can in “pushing the limits.”  Quietly non-confrontational, she does not waver in speaking her mind against injustice. As commissioner, she has successfully interceded with the authorities for detainees to have access to lawyers and their families, and for victims to get financial compensation.  She firmly took action on cases of arbitrary arrest and detention and the exercise of freedom of expression and assembly.  She has widened her advocacy to address problems like forced child marriages, trafficking of women, and the rights of asylum seekers and refugees.  ANGKHANA’s term as commissioner ended in July 2019, but there is no doubt she will remain involved in human rights advocacy.  This is for her a deeply personal advocacy.

People have marveled at the transformation of this self-effacing housewife into a leading human rights defender.  But ANGKHANA herself is not surprised.  In her soft-spoken and measured tone she asserts: “Most women experience conflict and violence in a different way than men.  They also develop unique skills for resisting, addressing and preventing conflict.  The work on justice and peace cannot afford to neglect the constructive contributions of women.”

In electing ANGKHANA NEELAPAIJIT to receive the 2019 Ramon Magsaysay Award, the board of trustees recognizes her unwavering courage in seeking justice for her husband and many other victims of violence and conflict in southern Thailand; her systematic, unflagging work to reform a flawed and unfair legal system, and the shining she is proof that the humblest ordinary person can achieve national impact in deterring human rights abuses.

For me, the honor I receive today is not a symbol of victory, or the end of my and other survivors’ struggles for rights and justice. It represents a recognition of the continuing struggle for human rights, justice, freedom, democracy and the rule of law of all survivors of human rights abuses in my country and in our region. Also, it means that the voice of victims should be heard.

As a survivor of a human rights violation and a woman human rights defender, I realize that rights, dignity and human values are very important to all human beings. The continuation of the culture of impunity, militarization, failure of the justice system and the social acceptance of those violations are crucial contexts that have kept many victims live in suffering and fear.

While leading a civil society organization, I had the opportunity to work with many vulnerable groups, especially the vulnerable of the vulnerable such as victims of human rights violations in Southern Thailand, most of whom are women, refugees and asylum seekers or grievous women who are victims of gender-based violence. As a former human rights commissioner of the National Human Rights Commission of Thailand, I had the opportunity to work mostly on civil and political rights and women’s rights. I found that many human rights challenges faced by Thailand and other Asian countries—such as violent extremism, poverty, refugee crisis, absence or lack of freedom of expression—are only the tip of the iceberg.

Colleagues, history tells us again and again of the impact that ordinary heroes bring. Extraordinary in their courage, determination and commitment they serve as evidence that every one of us can make a difference to stand for what is right and just. Each and every one of us has a choice to work to promote the upside rather than the downside of humanity. We all have a sense of responsibility towards each other to respect our diversities while protecting our equality. All of us have a hero inside us that is able to recognize the beauty in all of humanity.

Again, I would like to thank the Ramon Magsaysay Foundation for this prestigious award. Thank you, too, to my colleagues and friends who have always supported me in my work as a WHRDs and a human rights commissioner. Last but not least, special thanks to my family, my father and my children who always stand by me and trust in everything I do.

My honor today as Magsaysay awardee has shown the story of an ordinary woman’s struggle for justice, democracy and the rule of law and—this is a big change for women, for families and for the nation. 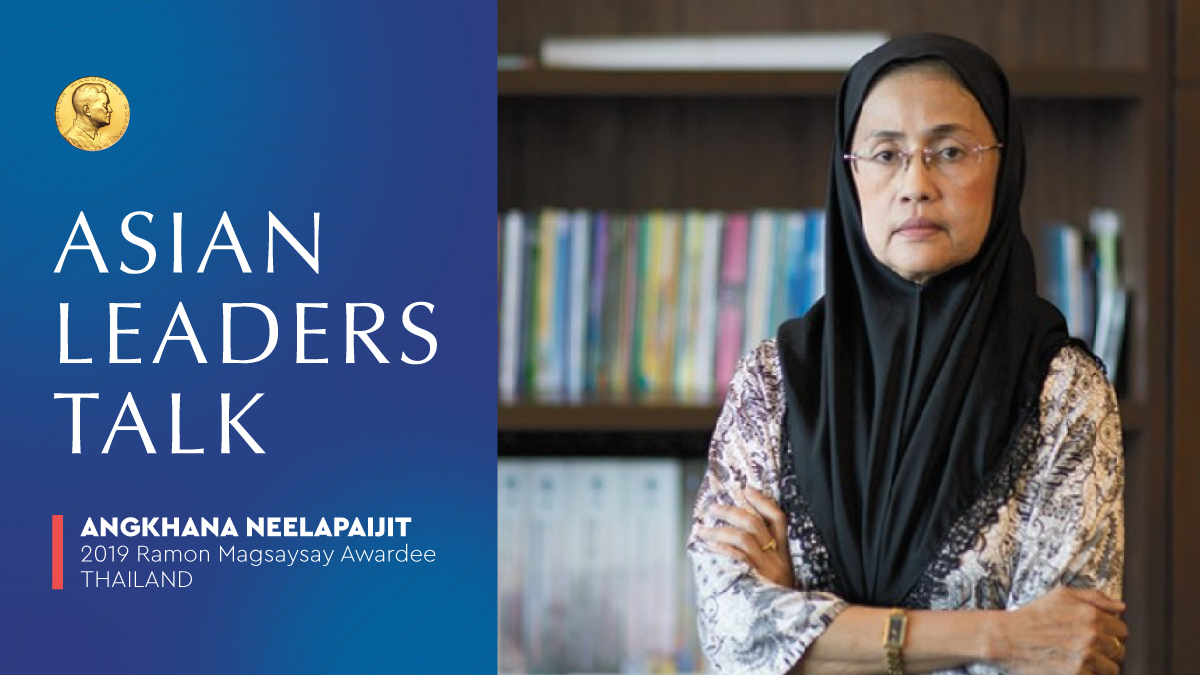