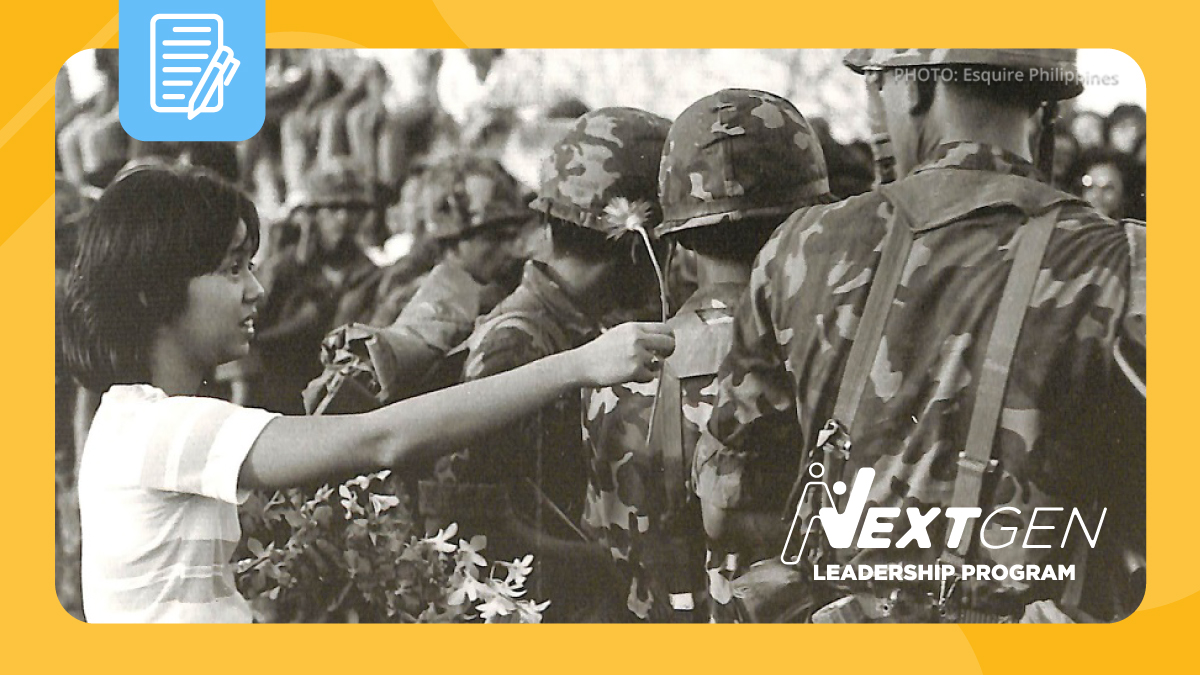 
In a casual conversation with one of my professors who lived through the Marcos years, she asked if I was currently involved in student activist circles. Aware that she and her peers were leading figures of resistance in Ateneo de Davao in the 80s, I tiptoed around the subject. After all, being the editor-in-chief of AdDU’s student publication Atenews—another historic bastion of martial law resistance—that time, I was perfectly aware that the current student movement in Davao now had a different flavor.

“Iba pa rin talaga dati (The past is really different from today),” my professor disappointingly replied.

Growing up in the post-EDSA period means many things for young people. Born in relatively “peaceful” times, we may be quick to believe that our own comforts mirror EDSA’s promise of the good life yet slow to realize that our current situation feels eerily like the events that transpired before EDSA.

In our history books, it is well-known that the martial law years were a time of great danger and discontent. According to the Martial Law Museum, the ordinary Filipino suffered from increased poverty and decreased wages while the prices of basic goods tripled. Meanwhile, Marcos and his cronies looted the nation, diverting government funds into foreign bank accounts—some of which remain hidden until today. The Philippines’ international debt also skyrocketed by 24 times from 1961-1986. Although Marcos’s massive infrastructure projects have often been touted as concrete examples of the Philippines’ “golden age”, this debt-driven growth burdened future generations who must pay off these dues.

For us here in Mindanao, Marcos revived the discourse of the “frontier” through aggressive development projects that widened the gap between Christian settlers, Muslims, and the indigenous Lumads (Abinales 2010). Export-oriented agriculture and logging boomed, enriching Marcos’s elite allies while further impoverishing the peasant locals. Countrywide, figures show that deforestation during the Marcos regime reduced the Philippines’ forest cover to almost half. Worse, those who spoke out against these injustices were subjected to forced disappearances, indiscriminate torture, and executions—some of whom were student leaders from across the country, such as Ateneo de Manila’s Edgar Jopson, one of the key figures of the First Quarter Storm. Those who persisted in the resistance joined the underground movement, including our Atenews elders, such as the award-winning writers Br. Karl Gaspar and Dr. Macario Tiu. Evella Bontia, Dr. Tiu’s predecessor as EIC in the late 60s, was killed whilst underground even after her stint as a student leader in AdDU.

All these factors combined, it comes as no surprise that the youth in the 80s eventually snapped and ignited the historic EDSA People Power Revolution, now on its 36th Anniversary. Like most accounts, our enduring narratives about EDSA usually go this way: Even in the absence of quick communication channels, Filipinos were able to mobilize with millions taking to the streets in defiance of the Marcos regime. Unarmed except for their rosaries and firm resolve, Filipinos courageously held the line against metal tanks and ammunition. Soon enough, Marcos Sr. found himself fleeing Malacañang and exiled in Hawaii where he died a pathetic death. Back in the Philippines, democracy was restored by the Aquino administration, with a new constitution that guaranteed reforms and outlawed authoritarianism.

While this optimistic view about the historic return of democracy is commendable, it tends to conceal the shadow of Marcos’s lasting legacy of poverty, corruption, and despair while glorifying the equally flawed system of democracy that emerged afterward. Contrary to what some would claim that we now live in more “peaceful” and “convenient” times, the class differences that make life comfortable for others while unbearable for some seem to be the exact opposite of what democracy is supposed to look like. If I have a roof above my head, parents who earn fair living wages, and access to quality education, then I can easily claim that the promise of EDSA worked for me. By contrast, another person who does not enjoy these luxuries might not be able to tell the difference between life before and after EDSA.

So where did we go wrong?

I believe we might have been too enamored by the promise of EDSA that we overlooked the more sinister ways in which Marcos’s legacy seeped into the common consciousness of elites and politicians. More and more, the political families of today have been employing Marcosian strategies to enrich themselves and cement their grip on power. This has resulted in a similar pattern of injustices, from government corruption, press intimidation, and red-tagging to notorious extrajudicial killings that target the poor.

But unlike the 70s and 80s, we live in a time where information is everywhere. Thanks to the internet and social media, young people now have more avenues to communicate and mobilize. We also have more resources at our disposal to educate ourselves and our communities. Yet, ironically, it is the same terrain that has brewed apathy and disinformation among the youth. Nowadays, it is impossible to talk about politics without considering its maneuverings in social media. Fake news, trolls, and historical revisionism plague major social networking sites like Facebook, Twitter, and Youtube. With these tech giants refusing to disclose their algorithms, we are made prey to corporate interests and configurations that create an echo chamber of ideas.

Social media has become so indispensable to the youth of today that new forms of protests have also emerged. Virtual rallies, twitter debates, and the so-called ‘online activism’ seem to embody the vibrance of our democracy. But social media is not everything. In order to keep the spirit of democracy alive, it is imperative to go out there and be in touch with people’s lived realities. One does not simply post a photo or adopt a new frame to perform their solidarity with the poor and the marginalized. In order to fight injustice at its core, we need to join hands, set aside our differences, and embrace an ideal for the common good. That is the enduring legacy of EDSA.


Months after getting that remark from my professor, I find myself in the hinterlands of Davao Occidental doing anthropological field work with the Tagakolu tribe. I am not the same as the martial law activists of the 70s and 80s for I live in a different time. Nonetheless, it is clear to me that the injustices of the past have not gone away. Perhaps they have only taken a different form. This calls for a rejuvenation of the EDSA spirit among the youth, one that can be done by breaking the apathy and being in solidarity with the people.