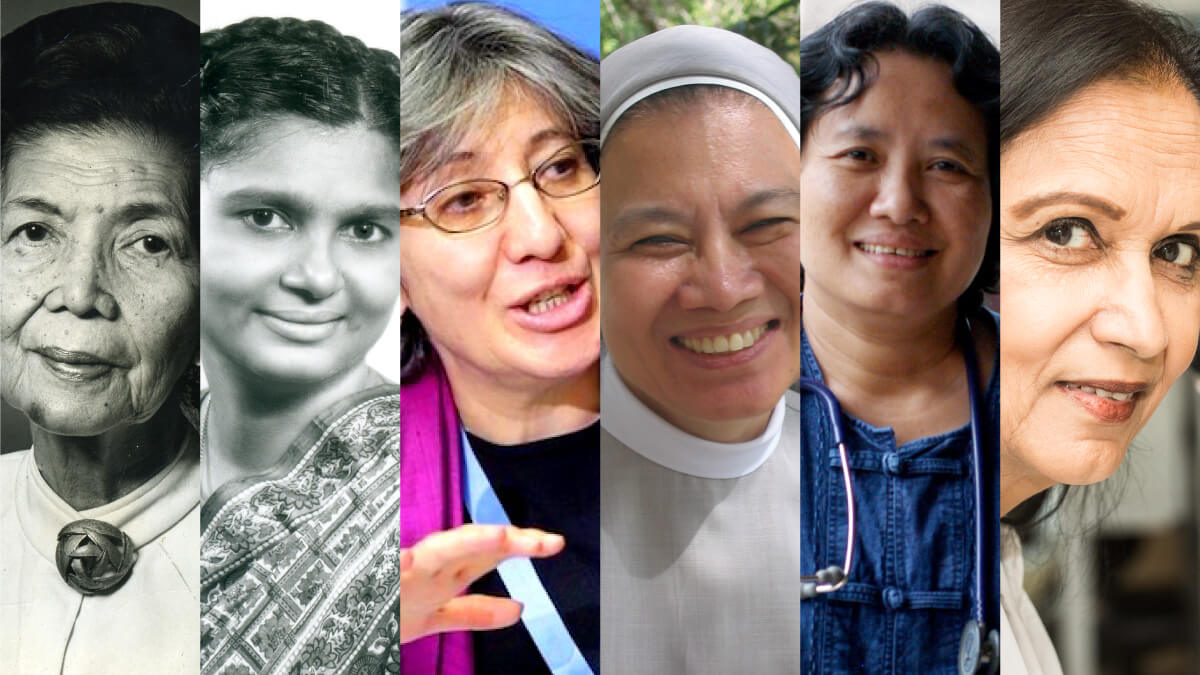 According to the United Nations, "a significant gender gap has persisted throughout the years at all levels of science, technology, engineering, and mathematics (STEM) disciplines all over the world. Even though women have made tremendous progress towards increasing their participation in higher education, they are still under-represented in these fields."

In celebration of the International Day of Women in Science on February 11, the Ramon Magsaysay Award pays homage to women in STEM who have received Asia's premier prize and highest honor, and all the women across the world who are breaking gender barriers in science and technology.

Here are just a few of them:

Dr. FE DEL MUNDO pioneered a number of innovations in the field of medicine in the Philippines. She has dedicated her life to pediatric healthcare—from the prenatal care of mothers to the health and development of children through adolescence.

Among the many contributions of Dr. DEL MUNDO are the Children's Memorial Hospital, now known as the Philippine Children’s Medical Center (PCMC), the Philippines’ first pediatric hospital; developed a bamboo incubator to help families in rural communities without electricity; and authored “Textbook of Pediatrics and Child Health”, which was used in medical schools in the Philippines for many years.

MABELLE RAJANIKANT AROLE, together with her husband Rajanikant are doctors who served India's rural poor through medical service.

Despite the rough start of medical practice in Jamkhed, in Ahmednagar district of Maharashtra, the two doctors were able to win the acceptance and trust of the community by developing the Jamkhed Comprehensive Rural Health Project which focuses on making the locals self-sustaining in rural health and economic betterment.

As a child in school, Dr. SIMA SAMAR learned what it meant to be a scorned minority in Pushtun-dominated Afghanistan. She discerned, moreover, that as a female in a conservative Muslim society she was doubly “second class” but she strove to prove her own worth.

SAMAR was one of the first Hazara women who completed her medical degree. She aided the anti-Soviet resistance movement, and in 1984, when her husband was arrested, SAMAR and her small son fled to the safety of nearby Pakistan, where thousands of refugees from war-ravaged Afghanistan lived in appalling misery.

SAMAR devoted herself to her fellow refugees. She not only helped the refugees by providing medical services through the Shuhada Clinic where fees are low, medicines are free, and all refugees are welcome, male or female. She also made sure that women, especially young girls, received education by establishing the Ariana School, the community’s first school for girls.

SISTER EVA FIDELA MAAMO is a Filipino nun who dreamed of becoming a doctor. During her teenage years, SISTER EVA took up medical studies because she thought it would go well with the religious life, for which she felt stirrings.

In the midst of her residency at the Philippine General Hospital, SISTER EVA was sent to Lake Sebu in Mindanao where she built a crude bamboo infirmary and treated T’bolis, Manobos, and other hill folks from the surrounding mountains. She also performed miracles of improvisation—operating by flashlight and substituting coconut water for dextrose— and expanded health services by training local men and women to serve as “barefoot doctors” in isolated villages scattered across the hills.

Working through the Foundation of Our Lady of Peace Mission, which SISTER EVA founded in 1986, she extended a helping hand to needy communities throughout Manila by maintaining no-fee health clinics in ten depressed areas and providing nutritious meals daily to malnourished children in six of them.

Founder of Mae Tao Clinic, CYNTHIA MAUNG is a medical doctor from Myanmar who since 1989 has lived in Mae Sot, on the Thailand-Myanmar border where she provides medical assistance to refugees.

Born to a Karen family in Moulmein in 1959, CYNTHIA MAUNG studied medicine at the University of Rangoon. During her medical practice in a Karen village near her hometown in 1988, Myanmar's military junta launched its bloody crackdown against democracy advocates. Packing a few clothes and a medical reference book, she fled with some students to Mae Sot, Thailand, where she joined other exiles. Trauma and illness were rampant among the refugees, and there, Dr. CYNTHIA went to work.

With hardly any supplies at all, she improvised by sterilizing a few precious instruments in a kitchen rice cooker and by soliciting medicines and food from Catholic relief workers and nearby refugee camps. In 1988, to keep up with the demand on bringing health services, Mae Tao Clinic began its backpack-medic program after the over-the-border clinics were overrun and destroyed by the Myanmar army, and is continuing to assist displaced villagers across the border.

Affordable vaccine champion Dr. FIRDAUSI QADRI played a key role in the development of a more affordable oral cholera vaccine (OCV) and the typhoid conjugate vaccine (Vi-TCV) for adults, children, and even infants as young as nine months.

Born to a middle-class family that encouraged women to pursue an education and a career, she decided to specialize in medical research, earning a degree in biochemistry, and culminating in a doctorate from Liverpool University in the United Kingdom.

Set to use her knowledge and skills for the benefit of her homeland, QADRI returned to Bangladesh where she eventually joined the International Centre For Diarrhoeal Disease Research, Bangladesh (icddr,b), an international health research institute based in Dhaka, where she focused, for the last three decades, on communicable diseases, immunology, vaccine development, and clinical trials. Her exemplary contributions to science and health continuously bring glory, honor, and hope to her beloved country and to all the lives she is saving.